This year is the 100th anniversary of the ANZAC landings on the Gallipoli Peninsula in Turkey.

A friend of mine went on holiday to USA a few months ago and brought back some beautiful material which she shared around the rest of us in the Village Stitchers Group. She asked that we think about making something with our piece and put it in the West Otago Arts & Crafts Show which was to be held in March 2015. I took up the challenge and duly entered mine in the show. 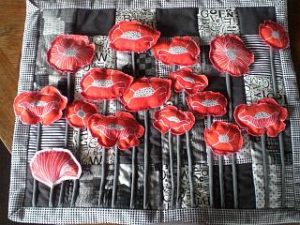 The many thousands of people who died or were injured in World War One are represented by the black and white background, the white material which has the initials of those people, the Remembrance poppies, and also the many dots on the frame. I like having a couple of the poppies escaping onto the frame and also one poppy is deliberately different. After all, we are all different.

I joined some black and white squares together in a line. I pinned one edge of the centre row onto some batting (right side upwards) then with right sides together I sewed another row onto the first.  I then flipped it over to show the right side and sewed another row onto that. I then did the same going back the other way until I had the full six rows sewn down onto the batting. For those people still learning the techniques (like I am), I am sorry I forgot to take photos as I went along. I get so frustrated when I see something on the internet that makes me want to make something similar but then I cannot figure out how the person did it. Now I know why they do not tell you, they are too busy doing it to stop and take pictures. 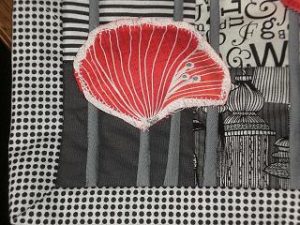 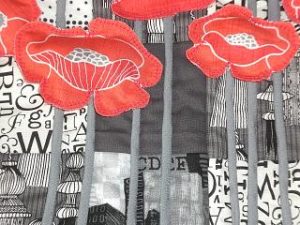 I cut out the poppies from the material and machine sewed them onto a backing material with a small piece of batting inside it. Actually I used the inside filling of a duvet that I had cut up to make smaller because my bed in my motorhome (in USA you would call it a small RV) is quite a bit narrower than a normal bed.

I was a bit concerned about showing the finished article at the show as I am very much still a beginner but I decided that it would be good to show that you do not have to be perfect at something to have fun. Also I figured it might help someone else who is just starting out, to see that there are other people in the area doing the same thing, and then hopefully I might get some companion artists.

Mine did not look out of place and I was rather pleased with it.

This website uses cookies to improve your experience while you navigate through the website. Out of these cookies, the cookies that are categorized as necessary are stored on your browser as they are essential for the working of basic functionalities of the website. We also use third-party cookies that help us analyze and understand how you use this website. These cookies will be stored in your browser only with your consent. You also have the option to opt-out of these cookies. But opting out of some of these cookies may have an effect on your browsing experience.
Necessary Always Enabled
Necessary cookies are absolutely essential for the website to function properly. This category only includes cookies that ensures basic functionalities and security features of the website. These cookies do not store any personal information.
Non-necessary
Any cookies that may not be particularly necessary for the website to function and is used specifically to collect user personal data via analytics, ads, other embedded contents are termed as non-necessary cookies. It is mandatory to procure user consent prior to running these cookies on your website.
SAVE & ACCEPT